How to Unclog a Bathroom Sink Drain

on 12:24 PM
Every 4-5 months our bathroom sink drain gets clogged.
Considering I have 3 daughters, as well as myself, who all have long hair, as well as a teenage son with thick curly hair; I guess I shouldn't be surprised.
It seems no matter how many times I tell my "wonderful" children to, "Not cut their hair over the sink (and not pick it up,) or if there is hair in the sink, "Take it out of the sink and throw it in the trash.
So I end up with a sink with water that won't drain. 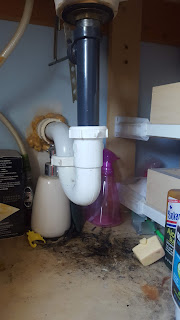 This is underneath my bathroom sink cabinet. This time around I get the added "bonus" of mold, ugh. 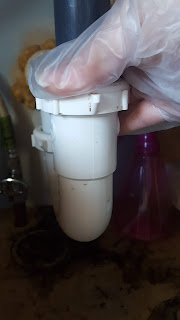 The first step on how to unclog a bathroom sink drain is to put on gloves.
Because that gunk that is going to come out is really gross.
Now, turn off the water under the sink.
There will be two medal knobs, turn both of them clockwise until they won't turn anymore.
You will also need an old container of some sort, one that you'll be throwing away.
I used an old creamer container that I had (re-purposing. :) 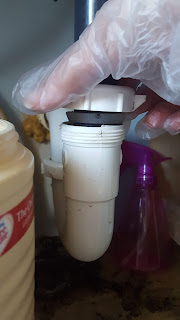 Next up, twist counterclockwise until the white (screw) part separates from the other piping. As seen above.
Do the same thing with the one in the back, until it releases the pipe.
Be careful here, you want to make sure to use your free hand (not turning) to hold the pipe so that it doesn't fall.
Now slowly take the pipe, and dump the contents into your container; then put the container under your pipe (as seen in the picture below.) 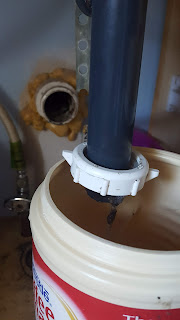 This may unclog your bathroom sink drain.
Unfortunately for me, it did not. 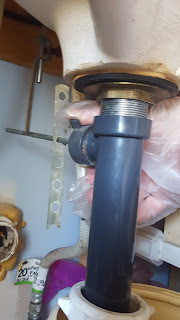 Next, turn the small pipe counterclockwise until it comes off of the other pipe. 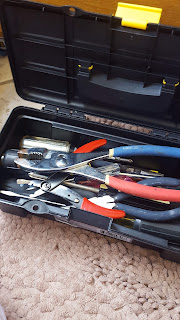 I had to get a large wrench to loosen up the metal part at the top of the sink (see pic below.) 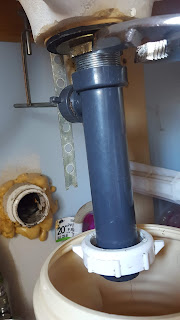 Once I loosened it enough to be able to turn the pipe around towards me; I was able to remove the metal bar with the ball attached. (See pic below) 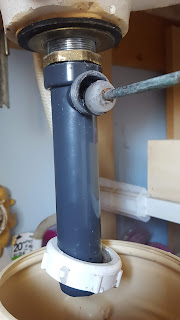 This "ball" can collect a lot of hair, and a lot of times after you remove it, you'll have unclogged your bathroom sink drain. 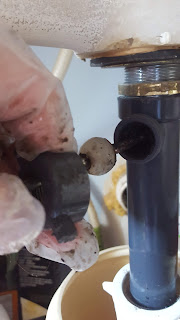 For me, it didn't unclog my drain; it did release some trapped water into my container.
What I did at this point was to completely remove the metal bar, and pushed it through the drain hole in my sink. 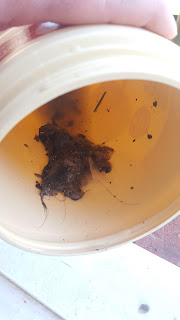 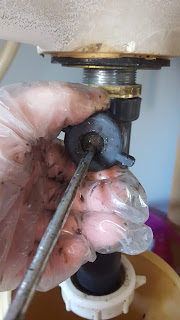 Finally, I figured out how to unclog my bathroom sink drains! As you can see the "lovely" culprit in my container, lots of hair!

Now, you're just going to put everything back on the same way you took it off.

Start by putting the "ball" back into the hole, and then turn clockwise until it is tightened.

Make sure not to over tighten because it'll be hard to get it off next time.
(Believe me, I know ;)


Take your pipe and put it back into the pipe sticking out of your wall, and tighten the white moving part until it's snug. (remember, not too tight) 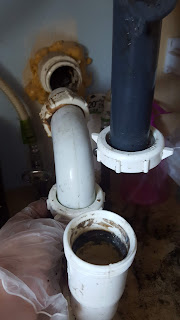 Finally, slide the top pipe into the large pipe, and tighten it down. 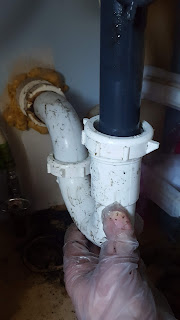 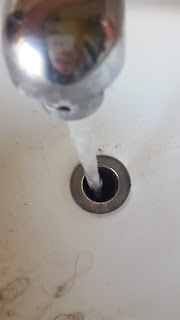 It's the Million Little Things, EVERY SINGLE DAY.

Like the microwave; every time our microwave is used it makes a horrible shaking sound. It's just one of the many little irritants that are just there.
You know, to irritate me everyday just for the fun of it.
Like my life is a huge comic relief for somebody, just not me.
Or the washing machine which has worked awesome, but has recently (7-8 months now) lost the capability to stop filling with water.
So the irritant involves having to turn the water on EVERY TIME I have to do the laundry; and then I get the added "bonus" of having to wait for about 5 min. for my super capacity washer to fill up, so I can then turn it off.
While I stand there for what seems like FOREVER, I just can't bring myself to buy a new one when all I have to do is stand here.
This is my life.
I love my life.
But, some days it just; is. a lot.
I'm sure you can relate, in some way or another.
We do our best day in and day out. It's hard sometimes.
When you have kids who just don't un…

I go through a lot of tablets thanks to my kiddos. So I am always on the search for the best cheap tablet sale. I have finally answered the question,"Where can I get cheap tablets?" Drum roll please...

Amazon now offers their fire tablets in three packs for just over a hundred dollars. This is an awesome deal, and the best place to get cheap, cheap tablets!